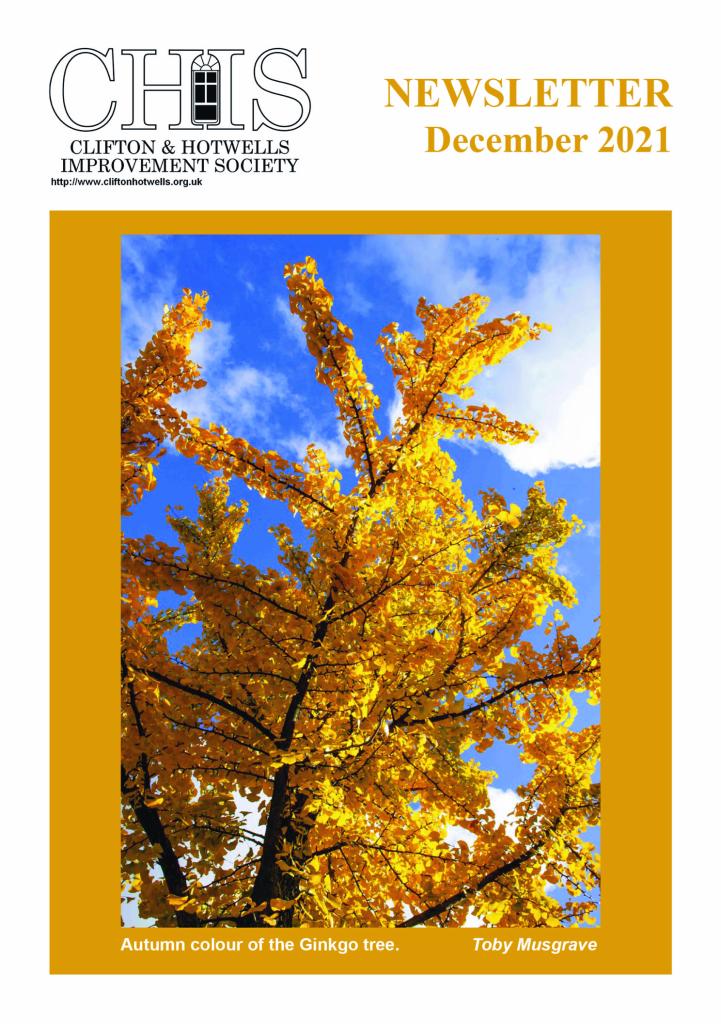 FROM THE CHAIRMAN Although throughout the last two years the Committee has kept the CHIS engine firing, it is a pleasure to record that we are back with a vengeance with our normal activities. The Remembrance Sunday Service at the war memorial at St. Andrew’s churchyard resumed, but with a smaller attendance than previously. The CHIS Wreath was laid by Peter Stanley, and Nick Sargent, newly elected to the Committee, attended in naval uniform. TALKS Our first AGM since 2019 was attended by around fifty members, attracted by the chance to hear George Ferguson and Clare Wilks gave an illustrated address on the exciting OurWorld Project for development on the Zoo main site. It has been actively promoted by CHIS. Prior to the Talk it was nice for the Treasurer and Chairman to be congratulated by our former Mayor on the briskness of the AGM proceedings. Later, the popularity of three earlier lectures by Professor Ronald Hutton ensured a goodly audience for his “Oliver Cromwell “arising from his acclaimed recently published book of that title. How lucky we are to have at Bristol University so exemplary a lecturer, ready to address the non-specialists. GREEN PLAQUES There have been two recent full ceremonies the first at the gates of Clifton High School to record the fact that Mary Renault had been a pupil there. In the light of her classical historical novels, a lively speech was given by Dr Ellen O’Gorman, Director of the Classical Institute at Bristol University, before a reception in the school, adjacent to exhibits of the West Bristol Art Trail.

Thanks to a generous bequest by the family of the late Roger and Pat Feneley we commemorated the original owner of Manilla Hall, General William Draper and the two monuments, to his regiment and to Pitt the Elder, by means of an elegant noticeboard on the Green across from Christchurch. Members of the Feneley family travelled to attend the dedication, which had to be fulfilled in the newly developed church Crypt because of the fierce North Wind. Dr Lois Goddard fondly remembered Roger as a fellow medic. Major Tim Watson spoke of the distinguished career of the General. Paul Main’s meticulous research for the tablet was applauded as was his wife’s work on the tasty fare. PLANNING The Zoo Western Car Park. It is impossible to exaggerate our disgust with the approval by Bristol City Council of the Zoo’s demeaning application and the procedure, all at total disregard of informed opposition from residents’ groups, CHIS and many others. It is a relief to praise a new development, the adaptation of properties adjacent to Clifton High School as a Sixth Form Centre. By consulting our Planning Group from the outset, the School showed that nothing but good results from reasoned discussion of a project. Would that other developers did the like! I must, however, finish on a melancholy note. The recent death of Dr Martin Crossley-Evans is a considerable loss to CHIS. He was the devoted Warden of Manor Hall. He enabled the erection of three plaques at Manor House, where he took members on a guided tour of it and the gardens. In lecturing to CHIS he displayed wit, style and scrupulous scholarship. Unfortunately illness prevented a promised Talk a couple of years ago.

I am sure he would have joined me in wishing CHIS and its members a Happy and Active New Year.